Remembering my grandmother: What I'm grateful for this Thanksgivvukah 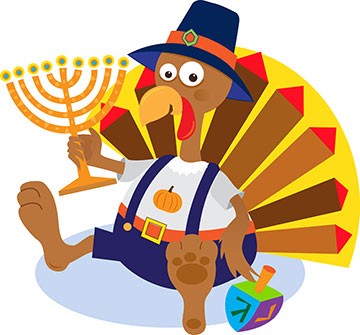 Often, when I take a moment to remind myself what I’m grateful for, I think about my grandmothers. My life is so much different than theirs were – although in some ways still very much the same. I cannot help but stop in awe at the opportunities that I have that they probably would have loved to have.

I especially think about my paternal grandmother, Beatrice Maryles Fink, z”l, who was a woman ahead of her time. She was one of a handful of Orthodox Jewish women who, in the 1930s, studied at Hunter College on the Upper East Side of Manhattan and received bachelors’ degrees. A few years ago, a friend of mine told me that her mother was part of that group as well, the ones who used to walk over the bridge from Brooklyn to get to college. They were as religious as they were serious about their secular learning, and despite many contrary stereotypes, they had no problem attaining advanced degrees while remaining fervently Orthodox. My grandmother’s degree was in math, of all things. Like I said, a woman ahead of her time.

Her problems came when she dated. She used to tell us stories about how she hid her achievements from her dates, so as not to intimidate men by appearing, heaven forbid, smarter than them. In the end, she married my grandfather, Cantor David Maryles, z”l, who apparently was proud of having a smart wife. She was “old” at the time of their wedding (26 years old, I believe), and also taller than him – a big taboo in those days as well – but he did not seem to have been bothered. In every photo I’ve seen of them together, he looks deliriously happy.

The story unfortunately did not have such a happy ending. My grandfather died at the age of 39 of leukemia, leaving my grandmother to care for five boys under the age of 12. She lived with her father-in-law for many years, working part-time as a bookkeeper to try and make ends meet. My father, who at 12 was officially the “man of the house”, also helped support the family from the time he became bar mitzvah. Wealthy they were not. From what I understand, it was more like just scraping by. So much for the power-woman with a degree in math who could conquer the world.

Still, my grandmother held on tenaciously to her own intellectual dignity. She found every opportunity to take classes, and had fascinating contributions to make to every conversation, always commenting on social trends and human behavior. I think that it’s her imprint that made me interested in sociology so many years later. Her idea of a great birthday present was always a book. I still have a shelf at home lined with books that she gave me, all of them inscribed to me in her impeccable handwriting. I did not read most of them at the time, just as I did not appreciate her while she was still alive and in sound mind. I’m terribly ashamed today that I did not give her then the respect that she deserved.

Yet, so much of what I do today is with the feeling that Grandma Bea is sitting on my shoulder watching me. I feel a deep commitment to the mission of making the world a safe place for women like her – for all women really, but especially for those smart, creative, independent-minded women who have an original voice, passion and ideas. I want to ensure that there are empowered spaces for women like my grandmother to thrive, to create, to speak, to emote, and mostly to feel completely alive and equally valued members of society. If my grandmother were living in the world that exists today, I can only begin to imagine the great things that would have come out of the fabulous workings of her mind.

So what am I grateful for today? I’m grateful for my life, where I have freedom and opportunities that I wish my grandmothers had. I am grateful for all the work that the feminist movement has done over the past two generations, making the world a better place for women. I’m especially grateful for religious feminists who have fought tirelessly against often fierce, aggressive and at times mean-spirited opposition, who never gave up the struggle to ensure that religious women are seen, heard, and valued. Feminists have enabled me to get to the place where I am today, where I’m working, speaking, writing, and thriving. And I’m able to do all these things while building a loving family, with a spouse and children who, like my grandfather, are proud and happy to have a smart woman around. That is not something I want to take for granted, ever.

Certainly the work of feminism is not done. In some ways, women today continue to struggle with many of the issues that they struggled with generations ago: social expectations around femininity and motherhood; a  stoic religious leadership that is often so reluctant to acknowledge women’s real needs; entrenched sexism in communal and social institutions. These battles are hardly over.

Still, there is so much to be grateful for. I wish my grandmother were here to see all this, to read my books, to talk to me about my dissertation in sociology of education – to have written her own dissertation – and to do things like go to a partnership minyan or attend the JOFA conference. I wish I could hear her thoughts about it all. I wish she would have had some of the opportunities that I have had. Perhaps my life is in some ways an extension of hers.

And, if I listen closely, I can hear my grandmother’s voice talking in my ear over my shoulder. I’m mostly grateful that she is still with me all the time.

Cross-posted on My Jewish Learning/ The Torch blog

More posts from author
Thursday, 04 March 2021 Unwanted touch, negiya, sexual assault, and the Cuomos of the world
Sunday, 28 February 2021 TWO DAYS till my new book launch!
Tuesday, 02 February 2021 How lockdown is affecting my relationship with my body
Sunday, 31 January 2021 Conversations with my Body: Now on sale
Thursday, 28 January 2021 Amy Coney Barret and Me: Thoughts on women who uphold the patriarchy