"Gaza: A Man's War" -- my feature article in The Atlantic 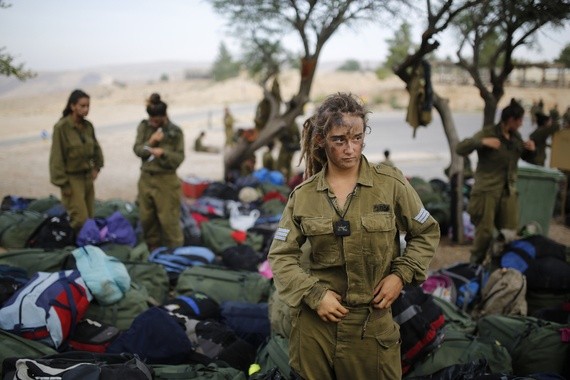 During Operation Protective Edge, Israel’s month-long military operation in Gaza, which is now suspended in a fragile ceasefire, Israelis were glued to their screens. And more often than not, those screens showed images of men. The Israeli soldiers were men. The Hamas fighters were men. The pundits pontificating were men. And nearly all the Israeli and Palestinian casualties were men. When women did appear, they were often seen eulogizing, mourning, or struggling to reconcile with their reality. The images capture a sobering fact: Women in the region are suffering terribly from the consequences of decisions from which they are excluded. But critically, these gender dynamics also point to a way out of perpetual conflict between Israelis and Palestinians.

From start to finish, the latest Gaza conflict has largely been a man’s war. The Israeli negotiating team in Egypt does not include a single woman–not even Justice Minister Tzipi Livni, whose condition for joining the current governing coalition was that she head Israeli-Palestinian negotiations. Prime Minister Benjamin Netanyahu has instead appointed his own (male) representative, Yitzchak Molcho, to represent him in the delegation. Livni sits on Israel’s security cabinet, the small committee that has made most of the major decisions about this war, but, tellingly, she is the only woman at the table. The story is the same on Israeli television and in the country’s newspapers. According to a study by The Marker, fewer than 10 percent of all experts interviewed on news programs during the war have been women.

The sexism underlying women’s exclusion from security and military leadership has found expression in some particularly troubling statements by senior officials and commentators. Moshe Feiglin, a member of Israel’s legislature, or Knesset, recently reprimanded lawmaker Aliza Lavie for discussing a bill on sexual violence, saying that wartime is no time to be “talking about things like flowers and sexual assault.” Bar-Ilan University professor Mordechai Kedar argued on Israeli radio that the only way to stop terrorists is to threaten to rape “their sister or their mother.” The implications have not gone unnoticed. “Women are sexually assaulted every day,” Amalia Schreier, a Lavie aide who had a hand in writing the sexual-assault bill, told Feiglin. “The comparison between ‘flowers’ and ‘sexual assault’ and the delegitimization of this issue has the effect of hurting and placing at risk 50 percent of the population.”

In the current conflict, all Israeli combat casualties have been men, since the Israel Defense Forces (IDF) does not allow female soldiers to operate in positions “over the border.” On the Palestinian side, virtually all Hamas fighters are men, and more than 80 percent of Palestinian casualties in Gaza have been male (a New York Times analysis on Tuesday found that Palestinian men ages 20 to 29, the population most likely to be militants, was most overrepresented in the death toll). But women suffer gravely too—among other things, they perish in homes, schools, and hospitals that come under Israeli attack and occasionally double as Hamas strongholds, and grapple with the psychological scars that constant conflict leaves behind.

Tweet
Tags:
women in the IDF gaza sexism in war
My political evolution
Where Are the Women Leaders in Wartime?

The slippery fish of news; or gender, politics and the exclusion of women