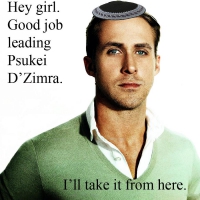 The new FB group I started in March called "I'm fed up with the way women are treated in Orthodoxy", also called "A home for Orthodox feminist and friends", has quickly taken off, with over 750 members and a constant buzz of activity. Yesterday's hot topic, for example, was a discussion of the Ryan Gosling pic you see here, a critucal satire of women in Parnership Minyan, part of the "frum Ryan Gosling" Tumblr. (The pic was created by Danya Lagos who joined the heated debate on the FB page!). The group has women and men of all ages from around the world, and not just Orthodox Jews either. Interestingly, there have been several posts from people who began with, "I'm not Orthodox so I'm not sure if I'm in the right group...." but all members have been welcome to share their stories, experiences and insights.

The group is intended to be a place where people can safely express their own feelings and perspectives on women in Judaism. This has clearly met an important need given the rapid growth of the group. We had an intense debate last week about the title of the group, with some people saying that "I'm fed up" is too "angry", and that the group risks being just a kvetch-fest. The debate also included the question whether to make the group open or closed, since an open group risks becoming fodder for attack ("unsafe"), while a closed group has that risk of becoming an echo chamber. After lots of weighing in, we decided to keep the name because we really do need a place where we know it's okay to be angry or frustrated without being immediately told that we have to be perky, and to keep it open so that whoever needs to find us will. At the same time, we created a way to post anonymously as "plonit almonit" for particularly delicate postings. And we wrote very clear guidelines for discourse to ensure that nobody feels attacked or shamed or unwelcomed. That is a very challenging task on FB, since we all know how quickly passions can rise and tempers can flame. But it's really, really important to maintain this group as a safe-space for sharing.

And by the way, the group is not "just for kvetching", although I don't want to minimize the value of sharing. There is a lot of support, empathizing, and analysis as well. Another interesting discussion currently going on is about "Why I'm still Orthodox". Jacqueline Nicholls, Leah Sarna and I all recently wrote blogs on this subject (unbeknowst to one another!), and so it seems to me like this is something that the people of the group grapple with as well. The group can help people figure out how to answer that question for themselves.

The group is partially inspired by the success of the Hebrew group, "Ani feministit datiya..."("I"m a religious feminist and I also have no sense of humor), which has become a really important place for religious feminism in Israel. I hope that this group will answer the needs of people who are engaged in the important work of making change in Orthodox life around gender issues.

Anyway, come by, join the group. Would love to see you there!

Pantsuits, Petitions, and Politics: Why I am still fighting the fight.....