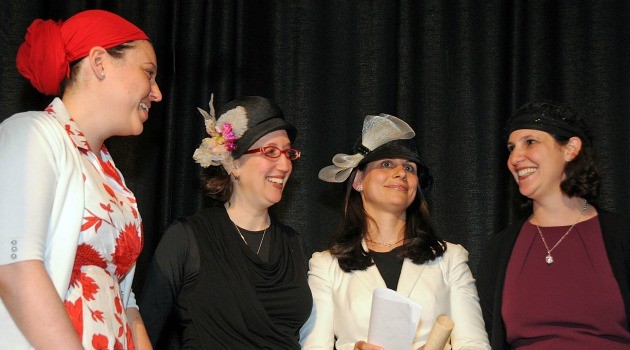 Zelda R Stern and Elana Sztokman's oped from The Jewish Week about the significance of the Maharat graduation: "Orthodox women are making history in front of our eyes. On June 16, three women will be ordained to serve, in effect, as Orthodox rabbis, given the title of Maharat (an acronym for the Hebrew words meaning leader in legal, spiritual and Torah matters). They will graduate from Yeshivat Maharat in New York City, the first and thus far only women to receive institutional ordination as religious and spiritual leaders in the Orthodox world. To a certain degree, this is not really news. Women have been working in Orthodox clergy position for years. And a handful of women have been privately ordained by Orthodox rabbis over the years. But next month’s graduation will mark the first time Orthodox women will be formally and publicly ordained with institutional recognition for the profound role women rabbis can play in Orthodox communities. Maharat women will perform virtually all the same pastoral and spiritual functions as men, plus a few. Orthodox women are often more comfortable approaching women about personal, intimate issues than they are approaching men. Maharat women will deal with those issues and have the potential to re-engage women in communal life — women who until now have felt that they have no leaders. As one young Orthodox woman recently told us, “When my husband doesn’t come to synagogue, the rabbi asks about it. But when I don’t come, he doesn’t even notice. I need a woman rabbi who I can connect to, who can take an interest in my spiritual life.”   Read the rest at The Jewish Week
Tags:
zelda stern maharat gender in orthodoxy Orthodox feminism jewish women
Tweet
3753 Hits
0 Comments

I would like to take a moment to consider provocative women. After all, those of us who are following events in Beit Shemesh have heard a lot about this subject. A woman trying to hail a taxi in Beit Shemesh and then spat upon was called “provocative” by Haredi men around her. Tanya Rosenblit, who sat in the front seat of a segregated bus from Ashdod to Jerusalem, was accused of being “provocative” by those men who stopped the bus from proceeding on its route. Even 8-year-old Na’ama Margolese was accused of being “provocative.” In my doctoral research, in which I spent three years in a state religious girls’ high school in Israel working on decoding girls’ identities, I came upon accusations of “provocative” in some telling moments. One day, the school held a special “Tzniut Day” in which there was an assembly and special classes on the issue of “modesty.” (It was actually about girls’ clothing and I do wish that people would stop calling that “modesty,” as if there is anything remotely connected between body cover and humility before God.) The rabbi speaking to the class framed the issue around teaching the girls not to be “provocative” by, for example, revealing one’s upper arms. Read more: http://blogs.forward.com/sisterhood-blog/148926/#ixzz1ifvOit54
Tags:
violence against women modesty tzniut provocative women beit shemesh gender in Israel gender in orthodoxy exclusion of women
Tweet
10298 Hits
0 Comments

Women Barred From Funerals in Israel

The troubling phenomenon of excluding women from cemeteries in Israel appears to be getting worse. Last week, Tal Yehezkeli of the IDF radio station Galei Tzahal broke the story of Rosie Davidian, who was not allowed to deliver a eulogy at her father’s funeral. Yehezkeli then reportedly received dozens of calls and emails from women around the country who have had similar experiences. In Jerusalem, women have been prevented from delivering eulogies. ‫ ‬ In Yerucham, Yavneh, and Elyachin, women were not allowed to accompany the deceased to the burial. In Petach Tivka, Nahariya and Tiberias, the crowd was forced into gender segregation despite the protestations of the families. All of these incidents are against the law, specifically the High Court (Bagatz) 2007 ruling that prohibits the exclusion of women from any aspect of funerals and burials. No less than eight cities are breaking the law, according to Yehezkeli, and women are furious. Read more: http://blogs.forward.com/sisterhood-blog/#ixzz1ffBzw9Ia
Tags:
gener segregation women in Israel funerals cemeteries gender in orthodoxy IRAC
Tweet
4932 Hits
0 Comments