"The War on Women in Israel:" Get an advance peak at the JBC blog! 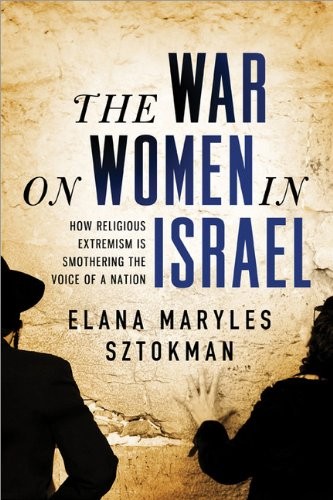 In advance of this week's Jewish Book Council conference, I wrote a series of posts at the JBC blog as their "Visiting Scribe". (Don't you just love the Jewish Book Council...) Two of the posts are sneak-peaks of my upcoming book, The War on Women in Israel, set to be released in Sept (pg), and one is with Dr Chaya Gorsetman about our award-winning book Educating in the Divine Image. Take a look:

Women being arrested for praying out loud at the Western Wall – it’s a story so shocking that it has managed to make headlines around the world. But the Western Wall is just one piece of a larger picture of religion and gender in Israel today. In fact, the threat to women’s well-being in Israel today, which comes from an increasingly radical religious power structure, finds expression in many areas. On public streets, on buses, in the government, in the army, in the courts, and in hospitals, women’s bodies are the objects of public scrutiny, debate and even violence.

10 Inspiring Ways That Women Are Fighting for Justice in Israel

In my previous post, I described seven frightening trends of religious radicalism in Israel threatening women’s well-being and in some cases women’s lives. Despite this dire report, there have also been some inspiring actions by women’s groups and other social activists fighting for human rights and change in Israel. The most interesting developments are those that come from religious feminist groups, fighting for change from within the religious world. But the work of religious feminism is tremendously bolstered by social activist NGOs working on a variety of fields. Below are 10 examples of inspiring campaigns by Israeli NGOs to reclaim women’s rights in the face of religious threats:

10 Ways You Can Promote Gender Equality in Your Local School

Gender messages are all around us. From images in schoolbooks to images on bus ads, from conversations on the train to those on the big screen, from clothing conventions learned at school or on Fifth Avenue – everywhere we turn, we are subsumed in messages about what it means to be a “correct” or “normal” woman or man. Just this week there has been a heated debate on our Facebook feeds about whether there is room in our society for women to express anger without being dismissed for not being perky enough. Gender is everywhere.

In our research, we have been especially interested in how these gender messages get transmitted in Jewish educational institutions. Schools are big parts of our adult lives – as parents, community members, and former students ourselves. And certainly schools are a big part of our children’s lives. Events taking place in school today are likely to impact our culture for years to come For that reason, we have found it useful to examine the gender messages in schools, and to provide people with tools to ask the important questions about their educational settings.

Here are some useful questions for parents, teachers, students, lay leaders, and other interested members of the community to ask about the educational institutions around you:

Look out for these upcoming events.....