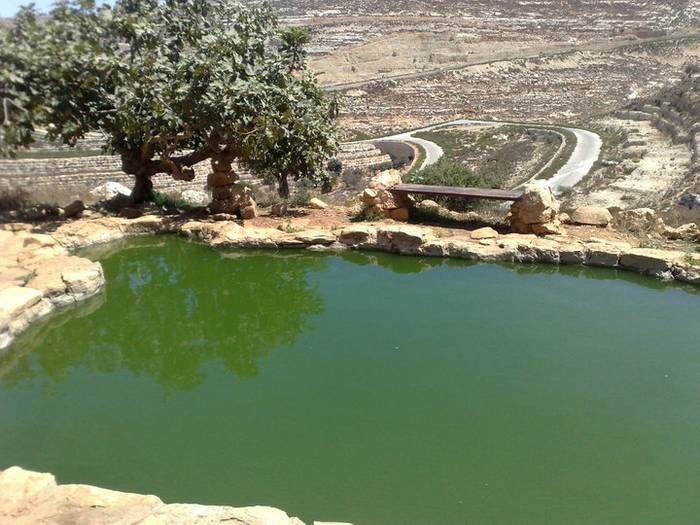 So last Friday, my daughters and I decided to go on little trip before Shabbat to see a natural water spring around 20 kilometers away. One of my daughters brought a male friend along, and off we went, climbing 100 meters up the side of a mountain to find this lovely site. The place was not too crowded – though I noticed that we were the only females there. Some 20-30 teenage boys were enjoying the spot along with their beers, cigarettes and nargilla. (That's so Israel, I thought, where the place for such adolescent hangouts is a beautiful nature spot that the boys are genuinely enjoying.) We were all having a lovely time swimming and laughing. Until a religious man showed up.

The man, in his forties or fifties, wearing a black velvet skullcap and sporting a beard, looked at us and began holding little conferences with some of the boys, while obviously looking at my girls with side glances. My daughter whispered to me, “He’s going to ask us to leave in a minute.” Sure enough, the man called over my daughter’s friend – apparently the “man” of our group, even if he is only 17 – and started talking to him. I called out, “What’s the issue?” If they are going to be talking about me, I wanted the courtesy of at least being part of the conversation.

“He wants you to leave so he can do his ritual dunk before Shabbat,” my daughter’s friend said. Apparently this man used this particular spring as his own private mikveh.

“There’s plenty of time before Shabbat,” I said, directly to the man. “Don’t worry.”

This got him at least talking directly to me. “Just climb up the mountain and stay there for 15-20 minutes so I can have the spring,” he said, not as a question.

I was sitting on the side of the spring at the time, next to my daughter who I don’t see often enough, really enjoying the moment, as well as the feel of the cold, natural water on my ankles and calves. I had just walked straight up the side of a mountain to get here, and there was no way I was getting off my spot to continue climbing and sit in the hot sun in a spot with no water.

“We’ll be leaving soon,” I responded, looking at my daughter’s watch. “Another 15 or 20 minutes and we’ll be done.” He walked away and puffed on the nargilla while he watched us. My daughter whispered, “You know he’s going to be nudging us in 10 minutes to go.” We left the spring, as promised, 15 minutes later, a little bit before I was really ready. (We hadn’t even eaten our sandwiches yet that the kids had spent time making.) But Shabbat was indeed coming and I still had a lot of things to do.

“He didn’t even talk directly to us,” my oldest daughter said as we discussed this in the car. I guess it’s a little offensive when your little sister’s friend has higher status in the family than you do, just by virtue of being male. “This is what always happens,” she added. My kids do a lot of hiking and camping with their friends, so they actually have more experience with the “spring hikes” (tiyul ma’ayanot) than I do. (Family outings have actually taken on a beautiful dynamic because our kids are teaching us about the land of Israel. But that’s a topic for a different blog.) So my daughter reported that this happens a lot – that some religious man or men will show up to one of the beautiful natural springs around Israel and ask for the girls to leave so they can dunk. Although the chilling-out quality of these outings does not easily lend itself to angry confrontations, the fact is that these demands are infuriating.

“What is it about me that makes his dunk improper when I’m here?” my daughter asked. “All these boys, no matter what they’ve been doing, they’re fine. But me, I’m the problem for him.”

For me, perhaps the most aggravating part was the entire way he approached us. It wasn’t that he came up to me and asked to discuss or negotiate or share. It was more like, he had is need and nothing else mattered. He was very comfortable walking into a public space and rearranging it according to his need. And in this case, as is so often the case, ”rearranging” the space meant removing women.

We as females do not even count as human beings in any of this thinking. There are men walking through the world – men doing their thing whether it’s working or Torah or just some idea in their brain about what they must do right here and now – and the job of women is to accommodate them as men. In this thinking, the job of women is to clear the space, to make ourselves invisible, to put aside whatever ideas or dreams we might have for ourselves in order to ensure that the men are able to use the world as they see fit.

And perhaps I do the same thing sometimes. I mean, on the one hand, I didn’t move for him immediately. I let him know that he couldn’t just tell me what to do. I wasn’t climbing a mountain and hiding behind a tree for him. I was going to sit there for as long as I wanted. On the other hand, the truth is I left before I was really ready, in the interest of acceding to his request. Maybe I should have said we would leave in an hour rather than in 15 minutes. I’m not really sure. Part of me is still stuck in some of the socialization as well. Or maybe, it’s just hard to keep enjoying a space when some strange man is sitting smoking nargilla and staring at your daughters.

There is something terribly wrong with the way the Orthodox world is socializing into gender. The problem is deep and it is spreading. Even to unsuspecting places, like little natural springs on the side of a mountain. If this space isn’t safe for women, where is?

Here is what I am thinking to do about all this: I think Israel needs a law to make it illegal to ask women and girls to leave a public space. We need some daring Knesset Members to submit legislation so that women should never again feel lilke it is okay to ask them to make themselves scarce. Next time something like this happens, I would like the right to call the police. Maybe then things will change.

Tweet
Tags:
gender segregation
What I Posted on Facebook About the Freundel Case
Is Orthodox culture responsible for creating the F...

Talking about gender segregation on airplanes: A Voice of Israel Radio