JewFem Blog: Body Issues
Elana Sztokman
5624 Hits
0 Comments
Does anyone else sense a kind of mind-twisting irony in girls photographing their underwear-clad behinds as a statement of feminism? I mean, i fully agree that the women's underwear industry is mostly oppressive and based on unrealistic patterns of sexually objectifying women, not just thongs.....So part of me loves this image and this movement of young women really talking back to their culture and saying NO to victoria's secret and anorexic barbie-doll models. I love that.
But i also think that there is something problematic about the photographic pose for the article, which still feeds into society's need to visually gorge on women in states of undress. Especially behinds. I mean, we all heard that the butt is the in thing this year, right? So this picture could be taken as part of this. It's tricky. Like, do we HAVE to have our half-naked pictures taken and spread on the internet in order to feel feministly empowered? Somewhere in me, that just feels wrong.
This is why i have mixed feelings about the latest feminist trend, of body-exposure-as-empowerment, the idea that the more free I am to expose my body as much as I want, under my terms, the more empowered i am.... You can see it with all the ads of "real" women in their underwear (and often lots of make-up and hair-styling). You can also see it in the "free the nipple" movement, which forces society to look at women's breasts in completely unsexual ways. This feels like the latest message for women -- that to be fully empowered, you have to be willing to be as undressed as possible in the most public way possible. And while there is certainly something empowering about owning your own body and sexuality, i don't know that maximum-exposure is the only way to go. I mean, in some ways this is where feminism started: by trying to protect women from having our bodies and our sexuality owned by the public. So who is more empowered and more feminist -- the one who voluntarily strips and gets paid lots of money, or the one who is free not to have to strip and be gazed upon by anyone?
I feel this dilemma in some of the discussions about so-called "modest" dress codes in school. For the record, I'm totally against dress codes, and think kids should be able to wear whatever they want. And I'm mostly against adults policing girls' bodies and measuring their skin and sexualizing them with commentary about knees or shoulders or prom dresses. I think adult commentary on kids' bodies -- especially girls' bodies -- is one of the most damaging things we can do to a person's sense of wholeness with her self and her body. Adults should not comment on girls bodies, period -- we shouldn't tell them that they are lucky to be tall or have nice "curves" or flat stomachs, and certainly not that they should try to change their bodies, like get thinner or get a nose job or wear spanx. Body commentary is all bad. The problem, though, is that sometimes the fight for freedom-from-school-gaze means that girls are fighting for their right to publicize their inner-Victoria-Secret model. Like, freedom from rules means that I have the right to dress like Pamela Anderson. It's tricky. Freedom from "modesty" can mean being shackled to fashion industry standards of beauty. I don't think that the point of the anti-modesty movement should be maximum exposure, or free publicity for the sexist and patriarchal fashion industry. Sometimes I feel like young women are finding ways to free themselves of one form of patriarchal gaze only to get trapped in another. Like in this photo. Free myself from the thong only to find myself being used as a tush model. That feels strange to me.
On the other hand maybe I'm wrong. These women are clearly not bothered by fashion standards. They are fully okay being themselves. And maybe that's ultimately the point. Maybe their willingness to have their real bodies out there in the open like this is exactly what they seem to be saying it is -- freeing.
http://www.nytimes.com/2015/05/28/fashion/young-women-say-no-to-thongs.html?smid=fb-nytimes&smtyp=cur&bicmp=AD&bicmlukp=WT.mc_id&bicmst=1409232722000&bicmet=1419773522000&_r=0
Photo 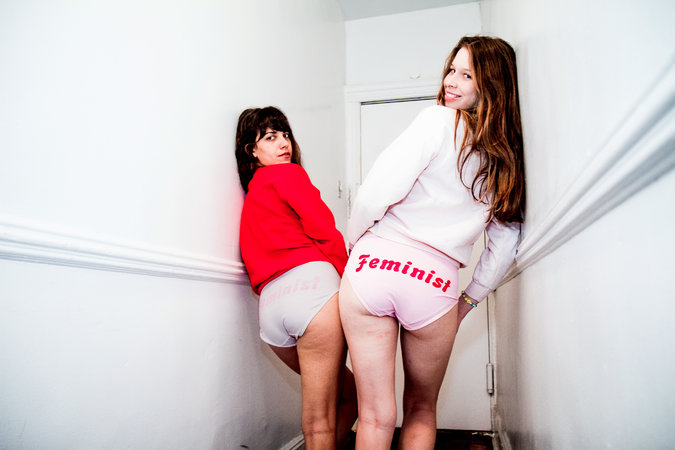 http://a1.nyt.com/assets/article/20150520-163317/images/sprite/sprite-no-repeat.svg); background-position: -295px -77px; background-repeat: no-repeat;">
Julia Baylis, left, and Mayan Toledano own Me and You, whose granny panties they model.CreditIsak Tiner for The New York Times
What do you all think?
Tweet
pinterest
Tags:
feminist underwear
Voyeurism and the Yeshiva Girl
Stop Minimizing Barry Freundel's Actions By Saying...