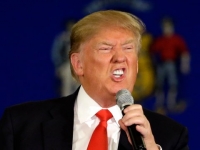 The current United States presidential election has many people on edge.

Therapists around the country are reporting spikes in patients dealing with election anxiety. Clinical psychologist Stephen HollandtoldThe Atlantic, “Among people who are not Trump supporters, we’re hearing a higher level of concern and dismay than I’ve probably heard in any election cycle, in 25 years of clinical work.”

Selfreporter Haley Goldberg evendescribed the feelingas “right in my chest, a tightening sensation that sent adrenaline through the rest of my body. It felt like I was gearing up to run away from a bear. But, unfortunately, I couldn’t physically run away from the source of my anxiety: Election 2016.”

Political Anxiety Disorder, says theWall Street Journal, is definitely a thing. Although this may ring true in all elections, this time the anxiety is different. This time, one of the primary causes isDonald Trump.

For some people, the anxiety comes from Trump’s proposed policies, which include banning all Muslims, and building a wall between Mexico because, in his view, all Mexicans are rapists.

For many others, though, the language and rhetoric coming out of the elections isn’t just about policy, but is actually personal.

One Mexican-American young woman named Carmencreated a powerful videoin which she responds to the fear that she has felt since hearing Trump’s attacks on Mexicans. “To witness a prominent politician speaking on national television saying these things to a cheering crowd is just unreal,” she says. “Am I supposed to feel ashamed of myself? Or where I come from? It had me questioning my heritage.”

Another woman named Tali Liben Yarmushdescribed the shamethat Trump evokes whenhe calls women fat, or when he described Rosie O’Donnell as a “pig.” “It is not meaningless to me that a man who is running for president thinks it is okay to tell a woman he disagrees with that she is a ‘fat pig,’” she writes.

“Do you not think it will affect some other young and impressionable girl when she hears him say that one of his opponents was too ugly to be president? What kind of message are we sending to children when we tell them it’s okay to call people we don’t like ‘disgusting,’ or to tell them they have the ‘face of a dog?’”

The reason why this year’s election has caused a heightened and exacerbated sense of anxiety among many people is because Trump’s language is not your typical political rhetoric. In fact, the language he employs comes straight out the handbook oftoxic masculinity.

That is, he uses toxic tactics ofemotional abuse– especially emotional abuse aimed at women – in order to put other people down. The tactics are powerful, emotionally violent, and often disarming against their victims.

For many people who have lived with abusers, this election brings back terrifying memories. As author Pam Houston, a survivor of child abuse,wrote, “Maybe it’s because I grew up in my father’s house that I can see Trump so clearly for what he is.  A desperately insecure bully, with no moral center – no center of any kind really – who feels momentarily powerful only when he is able to break those unlucky enough to step into his path.”

If you’re not accustomed to identifying and recognizing these tactics as abusive, they can leave you with unexplained emotional tremors. And if youareused to them – that is, if you’re a survivor of emotional abuse – watching this happen in public can be triggering and frightening.

One of the best ways to deal with emotional abuse is to shed light on the toxic tactics. Even when the abuse is leveled vaguely at entire groups from a public podium – as opposed to you personally in the privacy of your home – the first crucial step to identify what is happening, and to name the tactics for what they are.

With the goal in mind of shedding light on emotionally abusive strategies, here are ten of the toxic tactics that Trump has been using during this campaign, including some examples from the recent debate.

Trump is an expert at lying straight into the camera. Even when there is clear proof or recorded evidence, he will often lie without flinching.

READ THE REST AT EVERYDAY FEMINISM

Women choosing not to fast on Yom Kippur

Clinton forced to treat narcissistic bully like an equal