How I learned the significance of OYs and AYs in Rosh Hashana liturgy, Jewish life, and the human spirit 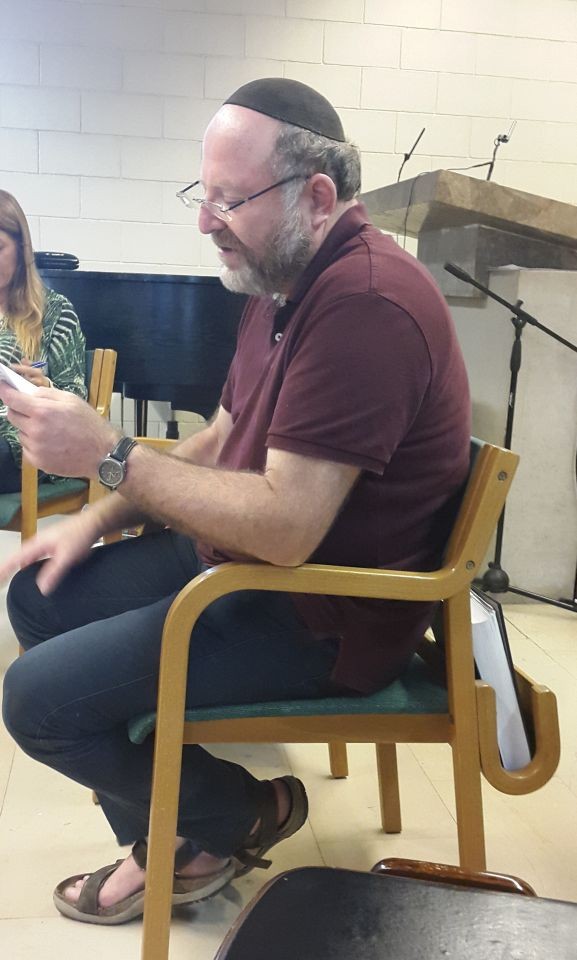 This morning in class, I think I was dreaming about Tevye. I was listening to Rabbi Uri Kroizer teaching us melodies of Selichot, the traditional prayers about repentance that Jews recite this time of year, and I could swear Tevye was somewhere in the room, spreading his energy around.  It may have been when Rabbi Kroizer, with his bellyful, honey-sweet voice and encyclopedic knowledge of Jewish liturgy, offered us the significance of oys and ays.

“The oy”, he said, “is a powerful sound, coming from deep down, and when done right, it reaches straight up to heaven,” he said, the light glowing from his eyes. It is a primeval sound, coming straight from the aches of the heart, asking God to take our sadness, he said.  He was teaching us the melody of a classic piece of the High Holiday liturgy, “Sab’enu”. He did not only teach us the music. He also instructed us on how to do a proper “kvetch”, to access the meaning of the “oy”.

“Think about something that has been missing for your this year,” he said, “something that you long for.” That “oy” is a moment of conveying that longing, of reaching out to God and asking to fill that gap. Plus, he said, “When you are upset about something, often you can feel yourself stopping to breathe,” he said. "The 'oy' is there like a pounding on the chest, to get your breath going again.”

Interestingly, the “ay-ay-ay”, on the other hand, serves a different function. It is meant to lift us up in joy. “When the melody is at its low point, it takes your spirit with it. So what do you do? How do you get out from under that?” he asked. The answer, he said, is in “the gradual uplift of the ay-ay-ay.”

“The oy is sad and the ay is happy,” Daliah Shaham, a third-year rabbinical student and musician, told us. “Most of the liturgy has both oys and ays, as we are usually happy and sad in the same breath,” she said, thus explaining so much of the Jewish experience. I felt like I was moving back in time, feeling the aches of my ancestors throughout history

Only I wasn’t back in Europe with my Hassidic Jewish ancestors. I was in Jerusalem, at Hebrew Union College, studying to be a Reform rabbi. .

There is some irony in the fact that I’ve spent my first two weeks of rabbinical school learning ancient liturgy. In joining the Reform movement, my assumption was that I would be moving forward in my practice, leaving some of this behind. And yet, I am finding myself connecting to old traditions – sounds, words, and practices –  accessing them in ways that I never have before.

This has been an unexpected pathway into the Reform movement. And it has been exhilarating.

In my 40+ years living in Orthodoxy, I never learned how to lead the High Holiday services, or any other service really. A friend taught me how to lead the Kabbalat Shabbat, one of the few sections that women can do in Partnership minyanim. I learned how to chant Torah and Haftarah mostly by osmosis. But even in women’s prayer groups and quasi-egalitarian services of Orthodoxy, the spaces where women are permitted to lead services is limited. Only parts that are so insignificant that underage boys can do them are also okay for women to lead. I have never sat in a class sight-reading the music of Rosh Hashana piyutim, or even a regular Shabbat mussaf.

I grew up in a house where shul was everything – where leading services and reading Torah were considered core aspects of Jewish involvement and identity. But only for men. I was there but I wasn’t. I absorbed it but didn’t really. My late grandfather, David Maryles, whom I never met because he died in 1955,  was a famous cantor in New York. We heard about him all the time. My father’s life revolved around emulating his father, who was taken from him too soon. We, his daughters, we were expected to revolve our lives around this, too – but in this perpetually passive way. We were there, but as enablers of men’s leadership roles. Our job was to serve, to support, to listen, and to watch.  The synagogue was a place where we supported the men in our lives.

I have heard the melodies countless times. But I have never truly learned them. Or owned them.

What is the impact of such an experience, where you are taught to love a thing that you can never own?

What does it mean to insist on educating a person to embrace your passion, while never allowing that person to use their own voice or mind or creativity to bring it into the world? What happens to a person whose function in the world is to be a vehicle for someone else’s joy and love, but never their own? That is what I’m finding out now.

This experience of learning the liturgy is old but new, new but old. It is familiar, buried deep in my subconscious like an old lullaby. But it has never been actively retrieved. It is as if I have been present in my life from behind a glass wall, observing and listening but never fully there.

This week, sitting in a circle with men and women together learning how to sing the Yom Kippur prayers feels like someone broke down that glass wall, and suddenly I am present. I can touch my heritage, my past, the music in my soul. I am finally present.

It is here in the Reform college where I am the most connected I have ever been to the synagogue experience. It is the first time I have ever owned it. I guess you can say that becoming a Reform rabbi is turning me more religious than I have ever been.

I suddenly realized that everything I was ever told about what it means to be Reform is wrong.

You don’t have to look far to understand this. Orthodox rabbis regularly use the term “Reform” as a tool of delegitimization. Often it is directed against women, or those perceived as disturbing the gender power hierarchy. A glance at some of the commentary on my blogs and FB since I announced that I am joining the Reform rabbinate has exposed a lot of this language: Reform Jews are not real Jews, their children will not be Jewish, they do not deserve to be Jewish, they are destroying Torah, they have no interest in Judaism, they do not understand what it means to be Jewish, all Reform rabbis violate Shabbat and eat pork and have affairs, and on and on. The image that Reform Jews have in the Orthodox world is of people who are ruining Judaism. But that could not be further from the truth.

I realized that most of the people making judgments about Reform Judaism have no actual knowledge about what goes on inside the movement.

HUC is unlike any of those descriptions. The people studying to be Reform rabbis are sincere, engaged, and thoughtful Jews. Our teachers are brilliant, soulful, compassionate and profoundly knowledgeable about Judaism.  They are exactly the opposite of the way they are portrayed in the Orthodox blogosphere. This is not a place for rote recitation or absently going through the motions. This is a place for exploring meaning and connection.

Most importantly, it is a place where I am embraced as a full Jew, equal in all ways to my male counterparts. And the experience has many layers of healing. It is not just the walls outside me that are breaking down. The walls around my  heart are breaking open, too.

I think I may have been praying for something like this for a while. And as Rabbi Kroizer taught us, sometimes our prayers actually are heard.

Tweet
Tags:
cantors HUC liturgy Rabbi Uri Kroizer rosh hashana
Are the High Holidays a celebration of women?
Where are women allowed to think and feel for ours...

Are the High Holidays a celebration of women?