I’m studying Talmud again. It’s been a while since I learned at the full-time Drisha Talmud program (A while? Like 25 years!) It’s been even longer since I studied with Rabbi Harari at the Yeshiva of Flatbush (OMG, more like 33 years.) Maybe it’s like riding a bike and you never forget how. More likely, the way I am studying now is unlike any other way I have ever studied it. 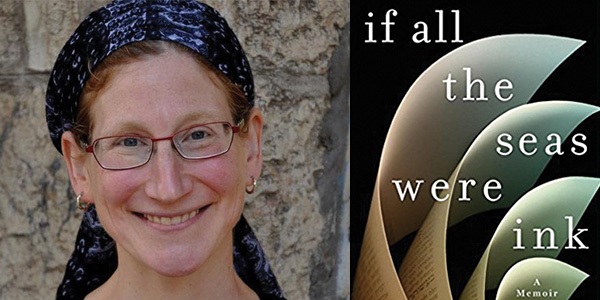 It helps that I just finished reading Ilana Kurshan’s memoir, If All the Seas Were Ink, an exquisite piece of literature in which the author uses the lens of her daily Talmud study – daf yomi – to reflect on the tumult in her life. In recounting passages about the destruction of the Temple, for example, she finds comfort for the dissolution of her marriage; in the Talmudic tractate of Yevamot, she finds her strength in women’s independence; from a bizarre passage about fish, she explores the depths of sexuality. She finds charm and complexity as only a voracious reader can. She sees comparisons between the Talmud and Shakespeare, Whitman, Jane Austen and Virginia Woolf. These allusions seem to come naturally to her, as they would to someone with this kind of life-long addiction to reading. She often uses her morning runs – before daf yomi class – as opportunities to memorize poetry.  Or, when she had a sprained ankle and was demoted from jogging to swimming, she would keep photocopies of poems in a plastic sleeve at the edge of the pool, pop her head out of the water every time she got to the wall, and memorize one line of poetry per lap. (Yeah, I know.) Her brilliance has not only given her an encyclopedic knowledge of literature that is rare today; it has also made her an exemplary interpreter of Talmud and a rich commentator on life. And by the way, what an extraordinary pleasure it is to read a book written by someone who so deeply loves books.

I thought about Ilana Kurshan as I sat in my first class in Talmud 101 with Rabbi Dr. Alona Lisitsa at Hebrew Union College. The Talmud is not quite as charming for me as it is for Ilana. When Rabbi Lisitsa (who has a special place in my heart because she is the one who first invited me to apply to HUC rabbinical school, with the argument that it is the only place where Jews can be anything they want; evidenced by the fact that she herself completely adheres to halakha), when she went around the room asking us to describe our relationship to Talmud and what we expected from this course, I could feel my head start to spin.

“I don’t like studying Talmud at all,” I admitted to my new colleagues, perhaps too honestly, suddenly realizing that I am about to reveal more about myself than perhaps I should be at this stage of Rabbinical School Year 1. Certainly, learning Talmud from Rabbi Dovid Silber and Dr. Devora Steinmetz at Drisha all those years ago was a privilege unlike any other. These are among the best Talmudic minds in the Jewish world today. And my chevrutas (study partners), Miriam and Shani, were impressive, bright and engaged. Much more engaged than I was, for sure. (Yeah, I was the annoying one.) What could I do? It just didn’t speak to me. I could not wrap my head around discussions of what seemed like irrelevant minutiae – goring oxen, heights of fences, times for sacrifices or prayers. I could not do what Ilana Kurshan did and weave the text into my life narrative. It never really worked for me.

“You told me that in our first conversation,” Rabbi Lisitsa reminded me. “You said that studying Talmud and halakha was a reason why you did not want to do rabbinical school.” Yes, it was a real consideration. The thought of spending so many hours studying these ancient texts was definitely a deterrent. It was perhaps also why it took me three years from the time Rabbi Lisitsa recruited me until I began my studies.

Today, though, it wasn’t just the irritation with minutiae that was grating at me. There was something else.

I was thinking about my very first experiences with Gemara, when I was a teenage girl in school.

“Do you know what tractate they taught us in ninth grade? Kiddushin! Kiddushin!” I could feel the heat rising in my face as my classmates looked at me.

“Do you know what kinds of messages there are in kiddushin? Not just buying a wife, but also blanket statements like tav l’metav tan du m’lmetav armelu.” A woman would rather lie with any man than lie alone, loosely translated. This awful, misogynistic thinking is at the root of so much of what is wrong in the Jewish system of marriage and divorce today. Yet, we learned this line with no criticism, no pushback, no questioning of its moral standing, and certainly no feminist lens. We learned this without ever asking ourselves, or other women we know, whether it is even true that women are this desperate to be married at any cost.

Teaching this kind of text to teenage girls who are powerless to process it on their own – who are not allowed to be rabbis or halakhic decisors, who are never allowed to be authorities even on their own lives and feelings – is an absolute travesty.

But it has taken me nearly 35 years to get angry about it.

I could feel the stunted and stifled feelings of my 15-year-old self as they began to surface. I thought back to who I was then, what was happening in my life as these ideas were poured into my soul unfiltered. I didn’t have anyone in my life with whom I could question the integrity of these statements. There was nobody in school or at home who would give me permission to ask the questions the way I would have wanted to. I had no language, no tools, and no context to be able to say, “HEY! That’s a terrible thing to say about women! And I don’t even think it’s true!”

I couldn’t say that then.

But I can say it now.

Now, I’m becoming a rabbi, so there! I will decide for myself what I think about the text, about women, about marriage, about my body, and about my life. Yes, I will.

“I’m ready to start studying Talmud again,” I told my teacher, “but on my own terms.” Inspired by Ilana Kurshan’s ability to find depth and meaning everywhere, and emboldened by the fact that I am now in rabbinical school where I can access the tradition without intermediaries, I have new rules of engagement.

“I will not deify the rabbis of the Talmud,” I said. “They may have some interesting things to say in some places, and they may have awful things to say in others. I reserve the right to be the judge, based entirely on my own mind, my own perspectives, and my own life experience.”

It’s sacrilegious, I know. We are taught that we stand on the shoulders of giants and have no right to question. Well, those giants were all men talking about women, and I am no longer willing to blindly stand on their shoulders. So sacrilegious I am. The rabbis were flawed, and often wrong, and I will not apologize for recognizing that.

"The Talmud is a product of the societies in which it was created," I added. "It is sociology, not absolute truth. I do not take it as binding."

I looked around the room and suddenly got nervous. Maybe I went too far.

“I really hope I didn’t offend you,” I said to Rabbi Lisitsa.

She laughed. “I love the Talmud, but I didn’t write it,” she said. “You are allowed to feel whatever you want about the text.”

You are allowed to feel whatever you want.

So simple, so powerful. I had to hold back the tears.

“You came to the right place,” they said.

Yes, I really did.

Are the High Holidays a celebration of women?

Are women really desperate to get married? Rereading the Talmud, at my own risk.....

From Weinstein to Trump to the Talmud: Lessons on being a woman in this world, then and now