I discovered today by accident (in a long email thread forwarded to me that made an aside reference to this) that my cousin, Harry Maryles, wrote me an "open letter" on his blog two months ago condemning my decision to become a Reform rabbi because, well, it would be a terrible shame to do this despicable thing to my ancestors. "She is joining a movement that her parents, grandparents and great grandparents fought against," he claims. 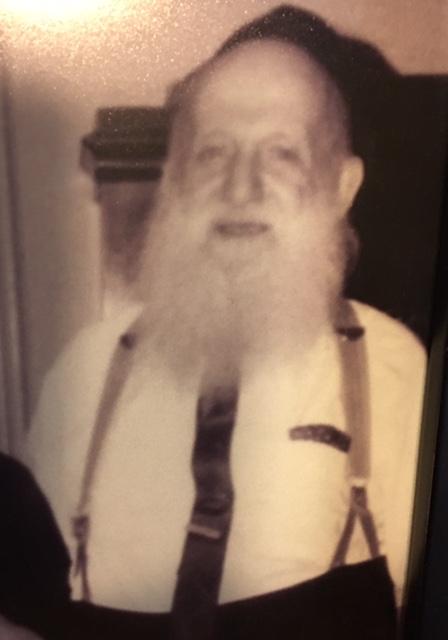 Maybe he is right. My grandfather, who he claims to represent, died in 1955, way before I was born, so who the heck knows.

Anyway, he writes, "By joining the Reform Movement she is saying that their version of Judaism is as valid as that of Orthodoxy but better in the sense that it is more welcoming - and a far better place for feminists like her." That's right. That is exactly what I am saying.

I'm wondering why he is not embarrassed by that, why all Orthodox rabbis are not completely ashamed that they represent such a culture that makes women feel that way.

Anyway, he continues, "I would ask my cousin Elana, to re-consider her choices. Please please don’t do this. I ask you to reflect on your family and your heritage. The negative repercussions may be far greater than you anticipate. And doing this may end up being the biggest mistake of your life." Okay then.

I posted this on my Facebook page. I explained as follows:

I am putting this out there in case any of you are interested in getting an insider's glimpse into what some of us have to deal with in our lives. I'm not going to honor this essay with an actual response or defense or explanation of my life choices, in part because he didn't bother to actually write to me or tag me or speak to me directly, so I have nothing to reciprocate (I have written in the past about how much I hate being talked "about" instead of talked "to", and this whole thing about men talking to other men about me and what other men think about women like me just makes me bristle).

But also, I am not responding in order to remind myself that just because a person happens to be a blood relative, it doesn't mean that they have any clue about you, your life, or the wisdom of your decisions. This is a good reminder of that.

And also, it is a reminder that every time women seek to follow our own minds and our hearts, there is someone there to claim that we are actually owned by others, by our ancestors, by an abstract community, by some kind of other-worldly obligation. Wow, I am so done with that.

That was last night. This morning I woke up to an incredible outpouring of love and support. Including from some incredible people whom I consider teachers and mentors. WOW!

What a gift. This is such an opportunity to be reminded why I am on my path. And to receive the real emotional, spiritual, and visceral reinforcement that nourishes me every day. And the reminders, once again, that family is not blood. It is something else. So grateful for my real family, especially my soul sisters. You know who you are.

(This photo is Harry Maryles' photo of my great-grandfather, Binyamin Mendel Maryles, whom I also never met, that he has on his blog. Posted without permission.)

For those of you following the saga of Harry Maryles, the one in which he writes a post suggesting that my ancestors would be shocked and horrified by my decision to become a Reform rabbi, he wrote a comment on my thread reinforcing the idea that I should reconsider because he is "also disappointed that you seem to have trashed you family heritage". And btw, he also takes issue with my characterization of his blog as a place where Orthodox men talk to other orthodox men about women. He called that "inaccurate" because women read his blog. And, meanwhile, he closed by asking me to "respond to the questions" that he asked.

For the record, I didn't see any questions in his post, just a demand that I ignore my life experiences and choices and drop what I'm doing because he says so. That is not a question.

Also, I would like to say to all of you who have to deal with people who say things to you like, "Answer my question", that this is a toxic tactic of verbal abuse. You don't have to answer to anyone, ever. Just because someone decides to dedicate an entire post, say, to his thought that you are embarrassing your family, it does not actually mean that you owe him or anyone else anything -- any kind of explanation or response or rebuttal. You do not have to engage. You will find that whole, "Why didn't you answer my question?!" trope in toxic exchanges, like this one, in which other people try to drag you into their arena so they can to do what they want with you. You don't have to answer. It's like a construction worker watching you as you pass by and saying, "Hey, come here, hey, why aren't you answering me? Hey I'm talking to you! Answer me!" Like that. Same thing. Dragging you into their muck just because that would be some kind of fun for them. That's what "Answer my question" or "please answer my question" or "why aren't you answering me?!" is. Toxicity. I'm just putting that out there. We don't owe anyone anything. We don't need to get dragged into other people's muck.

That said, I have chosen to respond to this. My choice. Consciously. Because what I have to say feels important and I am ready for it to be out there in the world.

Here is what I wrote to him on the thread, so you can know the correct answer to his comments:

"Harry Maryles With all due respect it is the height of arrogance for you to think that you know better than me what it means for me to live a good life or honor my family heritage. As you say, you never even met me. The chutzpah you have shown by assuming that you know about me and my life choices just because you knew my grandfather is astounding. Funny really.

"As for the idea that so many orthodox people then and now dedicated so much energy to what you call 'fighting Reform', well I think that once they have a real conversation with their Creator -- as some of my ancestors already are -- I have no doubt that they will realize what an awful waste of energy that is. Waste of energy! Reform Judaism is not the enemy. Feminism is not the enemy. Keeping women in our place is not Torah. It is just male ego. All this wasted energy. I have no doubt that my ancestors, my Grandma Bea especially, are applauding and cheering me on. Glad that finally someone in the family is putting that awfulness to rest.

"As for debasing my heritage? Because I am becoming a Reform rabbi? Well let me just say clearly in case it wasn't clear enough until now: you have no idea what you are talking about. I spend my days learning Torah. Talmud. Halakha. Tanach. Liturgy. Prayer. Hazzanut. I am becoming a rabbi! I have dedicated my entire adult life to the Jewish people. Plus, as opposed to you and so many of your followers, I pay taxes in Israel and send my kids to serve in the army. The only person who would see that as trashing my heritage is one whose vision has been clouded by blind hatred. Sinat hinam. Your inability to see clearly beyond the word 'reform' is a reflection of your clouded vision that has become overwhelmed by sinat hinam.

"Instead of focusing on MY choices, perhaps you should focus on your own. Maybe take down your blog for a while because it contributes so much blind hatred into the world.

"And by the way, perhaps you never noticed that your commenters are overwhelmingly male. Probably related to the fact that you write about women as 'them' and not 'you' or 'us'. You are not even aware that you are talking about women as 'others'."

This man will not let up. He was "shocked" by how "mean" the comments on my blog were. I tried to explain that perhaps he should examine where these reactions came from. Instead of doing that, he wrote yet another blog post about me, analyzing me to death and even going so far as to judge and correct a blog I wrote a few years ago about my grandmother.

So that's it. I blocked him. He is gone.

Let's be clear about this: My life is not pilpul putty. My relationships and my life choices are not some kind of ancient text to be analyzed to death by a bunch of heartless and compassionate men who consider Harry Maryles their guru. I am an actual person, not an object.

This, of course, is the problem with Orthodox discourse. The people leading the public conversation in the Orthodox community are so far removed from humanity and from what it means to live like a human being that they cannot tell the difference between a text and a person. Just because I wrote publicly about my decision to become a Reform Rabbi, it doesn't mean that my life is cannon fodder. And if someone like my distance cousin who has assigned himself to be judge and jury on my life cannot understand why what he is doing is exactly the opposite of Divine, then I have no interest in having any conversation with him or anyone on his feed.

So a funny thing happened to me when I posted about the editor of the Talmud; or, what to do when people think you’re crazy

Where are women allowed to think and feel for ourselves? That is my question

Is Orthodox culture responsible for creating the Freundels of the world?