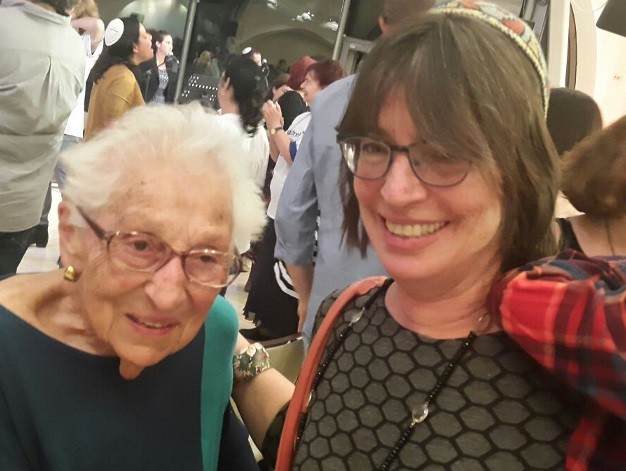 Rabbi Naamah Kelman had a really busy day yesterday. As Dean of the Hebrew Union College- Hebrew Institute of Religion in Jerusalem, she hosted last night’s smicha or ordination ceremony of the latest cohort of Reform rabbis in Israel. This was a particularly momentous event for the movement in that it marks 100 rabbis ordained in Israel and brought together top Reform leaders from Israel and around the world.

But Rabbi Kelman had a few extra special connections to this event. An eleventh-generation rabbi herself as well as the first woman in her family line to reach that stature, and the first woman to be ordained in Israel, she also got to watch as her daughter, Rabbi Leora Ezrachi-Vered was ordained – with honors – bringing the rabbinate to one more generation in the Kelman family.

“It was a real dor-dor [generation to generation] moment”, Naama’s sister, Abby Kelman, kvelled. Their brother, Rabbi Levi Weiman-Kelman, was also in attendance, as he served Leora’s escort for the ceremony. Their 94-year-old mother was also there, bringing four generations of rabbinate together.

“My mother has been daughter-of-, wife-of, mother-of, and now grandmother-of rabbis,” Naamah told the crowd, welcoming her mother along with all the other dignitaries in attendance.

This stirring interplay between family, community, and Jewish tradition that Naamah embodied – as Leora received a special dedication from her father, Dr. Elan Ezrachi, Naamah held her sleeping grandson on her shoulder – is one of the most beautiful aspects of HUC. This is a place that values the whole person – our work, our family, our ideas, our individual journeys and even struggles. The very personal approach to the ceremony, in which family members were invited to present blessings to the graduates and even sing to them, was unlike anything I had ever seen. And it is an attitude that characterizes my experiences there as a student, in which the staff actually want to know how you are doing, not only academically but also personally and emotionally.

This joyful, spiritual, sincere, authentic and emotional approach dominated the entire ordination ceremony. It was personal, communal, Israeli, historical, and very Jewish. (And it included  one very special Dag Nachash recitation by Rabbi Michael Marmur). This was a celebration of Jewish tradition, and especially the accomplishments of the Reform movement.

“Some people didn’t believe that we would get to this point of having 100 Reform rabbis in Israel,” said HUC President Rabbi Dr. Aaron Panken, speaking in immaculate Hebrew. “But I’m already ready for the next 100.” There is a special significance to “100 rabbis”, he noted, in that a petition by 100 rabbis has the power to change halakhic rulings.

“It’s a hard fight for progressive Judaism in Israel,” Abby told me. “It’s like walking uphill on glass barefoot.”

This is indeed a great accomplishment in a country that doesn’t officially recognize Reform or Conservative Judaism as legitimate forms of Judaism – not in politics, not in education, not in budgets and jobs, and not at the Kotel. But the Reform movement is fighting that discrimination, and has been having a few successes, such as a High Court ruling calling for Reform rabbis on municipal councils. Moreover, the Reform movement has built an impressive array of institutions and communities all around Israel, despite the absence of government support. And the community is growing. An estimated 7-8% of Jews in Israel identify as Reform or Conservative, according to a recent study by the Jerusalem Policy Institute (PPPI).

“I am part of something big and ancient,” Leora told the crowd, “something that is generations old.”  The ceremony was filled with liturgical and biblical references, traditional benedictions alongside specially-crafted ones. It was an example of blending the richness of Jewish history with the creativity of contemporary Israeli culture.

“The multiplicity of voices is a vital component of our DNA,” Naama wrote in her benedictions. “We must preserve our ability to share dialogue, respect and empathy with one another.”

This message exemplifies the Reform approach, as was expressed by many people at the event. This is a Judaism that deeply cherishes tradition, and which views mutual respect – kavod labriot – as the foundational component of the tradition. There are many corners of the Jewish world that can watch and learn.

The inter-denominational discourse and collaboration around these values is already happening. Israel Prize Laureate Professor Alice Shalvi, the 91-year old former Orthodox feminist leader who became Rector of the Conservative Schechter Institute, attended the ordination. I am privileged that Prof Shalvi was my mentor for a few years, and I still consider her one of my primary role models. She is still a bit upset that I chose HUC rabbinical school over Schechter, but I told her that I hope she forgives me. My dream is to be part of the collaborations among Jewish feminists from across the spectrum.

“It’s alright,” she smiled. “Anyway, nobody else does an ordination ceremony as well as HUC.” There was so much singing, dancing, and emotion that it was impossible not to be moved and inspired. “But I am not sure I will still be around for your graduation in four years,” she said.

“I’m counting on it,” I replied, but she didn’t seem convinced.

As I exited the building and returned to the streets of Jerusalem, where you can still find billboards in which women’s faces are blackened out, where rabbis last week called Reform Jews “traitors”, I returned the perplexity of our reality. I cannot fathom how anyone could witness the extraordinary energies and passion for Judaism that was on display at this ordination and feel anything other than love and awe. To deny these new rabbis a place in Jewish life is to waste talent, spirituality, creativity and care. It’s almost as wasteful as not allowing some 50% of the population to serve as rabbis. Why would anyone do that? What a waste of the human spirit.

This ordination gave me a very personal thrill. I am already looking forward to that moment four years from now – with God’s help, as well as the help of many others – when I will receive my smicha. I’ve already started writing the blessing in my head.

How I learned the significance of OYs and AYs in Rosh Hashana liturgy, Jewish life, and the human spirit