What REALLY makes the Israelites a chosen people? Dr. Lea Mazor teaches me how to read the Bible... 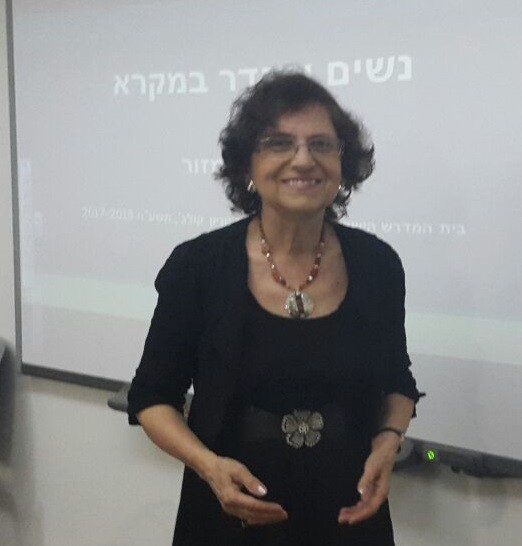 Dr. Lea Mazor packs a powerful punch into a tiny frame. This brilliant retired professor of Bible and walking encyclopedia of ancient Israel is teaching us a course in Gender in the Bible, one of my favorite topics. And every week she blows me away all over again with her knowledge, scholarship, and verve. There isn’t an issue that she hasn’t already thought about at length, and there isn’t a verse that she doesn’t have a fabulous personal anecdote about. The first week, when she interrupted her main thesis to share a story about the time she wrote a personal note to Professor Uriel Simon to tell him about the mistakes he had in his book, I made that mistake of saying – my pen furiously glued to my notebook – “Wait, can you please finish your sentence?” She responded, “Of course not!” (Actually, what she said, was, “Ma pit’om”, which literally means “What, suddenly”, but has the effect of a mix between, “No way!” and “Are you kidding me!?”) She did actually, finish her sentence eventually, and we have all learned to follow her along her effervescent stream of consciousness which tends to lead to mind-blowing places. This is a woman with a lot to share, and I don’t want to miss a beat.

Last week, we were exploring the issue of sexuality in Genesis. Big topic, I know. She has a particular thesis that she is demonstrating to us, and it is riveting.

The Israelites – that is, the twelve clans that derived from the family of Jacob – were a relatively small bunch of shepherds surrounded by some big empires of ancient Mesopotamia. The Egyptians, the Sumerians, and the Assyrians were among the massive neighboring cultures that were advancing in areas of technology, engineering, medicine, art, and writing, among other things. Modern-day scholars are still in awe about the things that the Egyptians were able to do. (To this day, nobody knows how they built the pyramids.) And so these little Israelites needed a way to preserve their identity and to maintain their own uniqueness and singularity. They needed to create a narrative for themselves to remind themselves how they were Different. Special. Chosen.

The way the Tanach chooses to relay how different Israelites are from the Other Nations is along one particular thesis: Sexuality. If you read the text closely, even from the beginning of Genesis, the idea that the Israelites’ distinction is based on purer sexual behaviors is clear.

This narrative, Dr. Mazor tells us, is apparent from many texts. For instance, the story of Noach after the flood, in which his son, Ham, and grandson, Canaan, “saw his nakedness” – a euphemism either for rape or castration according to Rav and Shmuel in the Talmud  (BT Sanhedrin  70a) – pointedly aims to justify why Canaan is destined to be servile to the descendants of Shem. The Israelites will have no choice other than to conquer Canaan and his evil sexual deviance.

The story of Lot and his daughters is another instance of sexual deviance that begets evil nations that will become the mortal enemies of Israel. Lot’s daughters rape him in a misguided effort to save the planet, and as a result give birth to the nations of Moab and Ammon.

Throughout the rest of the bible, these nations are viewed as the antithesis of Israeli culture. In the text about forbidden sexual relations, for example, the text that is viewed as so sacred that we read it on Yom Kippur the frame for all these bans is not to be like the other nations, “You must not do as they do in Egypt, where you used to live, and you must not do as they do in the land of Canaan, where I am bringing you. Do not follow their practices”. (Leviticus 18;3) Dr. Mazor says that their “practices” refer in this case to sexual practices.

Another interesting iteration of this theme is in the book of Joshua, where the Israelites enter the land of Canaan. Who is the first person that the Israelites encounter in Canaan? Rahab, the prostitute. Even though she ends up saving the Jews, she represents the notion that Canaan is a land of sluts and whores who constitute a danger to Israelite culture.

The laws of forbidden sexual relations are, of course, told to men and not to women. (As such, for example, lesbianism is not forbidden according to the Bible, as opposed to male homosexuality, because almost nothing in the Torah speaks to women.) The Bible also warns that men who violate these laws will be “expelled” from the land. The land, interestingly, is often cast as female. So is Jerusalem, in later years. Men who sin with women bring expulsion from that female land, and other suffering, to the other poor Israelite men.

Thus, in the book of Eichah, for example, which mourns the actual expulsion of the Jews from the land, Jerusalem is called an “impure woman”, and is blamed for the suffering of the Israelite (men). The narrator of Eichah, a man, blames the female Jerusalem for causing this pain. “Al ken lanidah hayta,” the therefore became an impure menstruant female. We know that being a menstruant is not something that women can change about ourselves; we just are. And yet, that very natural state is framed as the evil impurity that causes men to suffer. In other words, the default “Israelite” is a man, the object of sexual experience is woman, and the character of that sexual interaction is what determines the fate of the Israelites, whether they will live up to their fate to be a special nation, or whether they will be sexually perverted like all the other nations and cause themselves to be expelled from the nation. That is a core message of the bible, as explained by Dr. Mazor.

I think it’s brilliant. And it explains so much of how Judaism evolved as well as what is happening today in contemporary, Western society. Perceptions of women’s correct behavior and sexuality are at the core of Orthodox identity-building as well American political discourse and activism -- sometimes in ways that are hard to understand. America's obsession with birth control, abortion and women’s dress as hallmarks of pro-Christian politics can only be understood by going all the way back to these biblical messages. Controlling women’s sexuality has been the preferred way for men to assert their superiority over others for millennia. Apparently.

One more fascinating tidbit: Dr. Mazor has reminded us that the 24 books (or “scrolls”) that were ultimately included in the bible are chosen from among 600 books that were found in the Dead Sea Scrolls. They were chosen to promote a particular agenda, or set of agendas, that scholars are only now fully understanding.

I learned about one of the interesting findings from the Dead Sea Scrolls in a lecture by Professor Rachel Elior, one of the primary scholars investigating these issues, a few years ago. She found that some of the alternative texts of Genesis record the names of the daughters and not only the sons. That is, we know that in the Bible, when lineages are recorded, they are done from father to son with only rare references to daughters. We take this for granted as the “culture of the time”. But Professor Elior says that there are alternative scrolls from the biblical period that do, in fact, list the names of daughters, even the daughters of Adam and Eve. So much for the “culture of the times”. Even back then, there were different degrees of patriarchy.

The reason that these scrolls weren’t included in the Bible is very simple: they reflect incest. Think about it. How did Adam and Eve’s children create the next generation? There is only one way. It isn’t pretty.

Professor Elior argues, as does Dr. Mazor, that the bible does not include these scrolls in order not to highlight the fact that we are all descendants of incestuous relationships.

Not only would that reality make us all feel a little gross, it would also interfere with the narrative about how special and pure the Israelites are. Maybe none of us are really that pure.

Parashat Ki Tetze: The Beautiful Woman in Captivity and other stories where the men forget to ask the women about our experiences