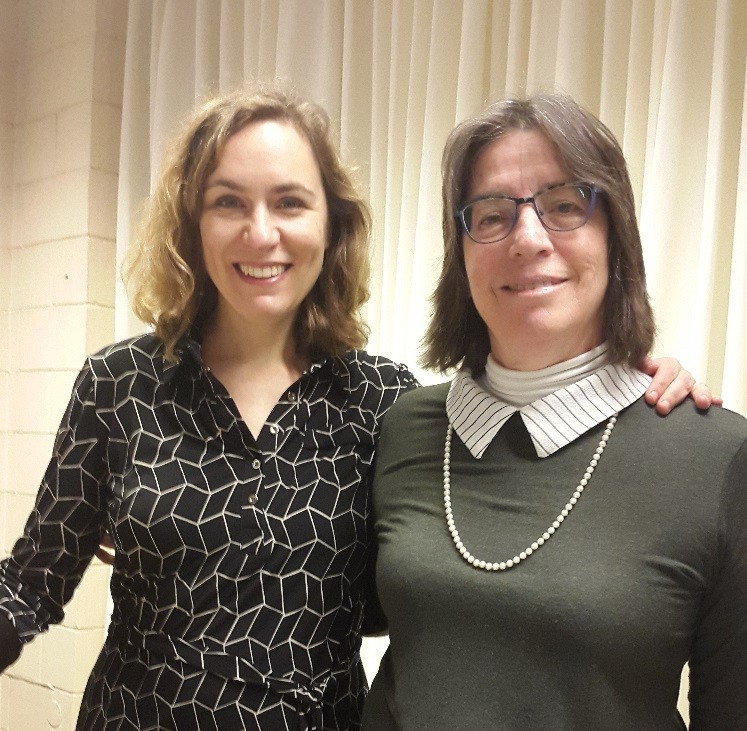 “This is the first time I have ever received a fellowship named for a woman,” Dr. Judith Rosenbaum reflected as she opened her first talk as the Sally Priesand Fellow at Hebrew Union College this week. Dr. Rosenbaum, who is the Executive Director of the Jewish Women’s Archive as well as a decorated and accomplished Jewish feminist historian, came to HUC to teach about Jewish women, feminism, and her mother. Yesterday was the sixth anniversary of the death of her mother, Professor Paula Hyman, a pioneering Jewish feminist who broke many glass ceilings. Dr. Rosenbaum will be speaking on Shabbat about feminism, Judaism, and her mother’s legacy at the HUC synagogue in Jerusalem. And she brought along her 10-year-old daughter, Ma’ayan with her, making the celebration of Jewish girls and women a truly intergenerational project.

“It is incredible to stand under Rabbi Sally Priesand’s banner,” Dr Rosenbaum told the HUC rabbinical students. “It means that Jewish feminism has really come into its next cycle, the next generation.”

Rabbi Priesand was the first woman to be ordained as a rabbi in America – in 1972, as part of the Reform movement. For many years everyone thought that she was the first woman ever to be ordained. But after the fall of the Soviet Union, when records and archives opened up, the world learned about Rabbi Regina Jonas, a Jewish woman who was ordained in 1935 Germany. She served rabbinical duties even in Theresienstadt, and she was tragically murdered by the Nazis in Auschwitz in 1944.

“The people who knew Regina Jonas’ story did not share it with the world,” Dr. Rosenbaum remarked. “We don’t know why. Her story was almost lost to us.” Scholars discovered a small box that Rabbi Jonas has kept safe, which included many of her writings and sermons, Dr Rosenbaum explained. It was a treasure, without which we may have never truly known about her remarkable achievements.

HUC Dean Rabbi Naamah Kelman, who broke a lot of glass ceilings herself –  including becoming the first woman to be ordained as rabbi in Israel – provided more vibrant context about Dr. Rosenbaum’s visit. “Your mother was my mentor,” Rabbi Kelman said about Professor Hyman, who was the first woman dean of the Seminary College of Jewish Studies, first to chair a Judaic Studies department at a major university, possibly the first woman to hold a chair in Judaic Studies, and one of the founders of Ezrat Nashim, one of the first Jewish feminist organizations, in 1971. Then 1973 marked the first ever gathering of some 500 women sponsored by Network, a Jewish Students organization. It was called The Jewish Women’s Conference. "I like to describe it as the Big Bang of Jewish feminism," Rabbi Kelman said. “I was the youngest one there, all of 18 years old. That is where I met some of the most amazing women who become my friends and mentors over the years, like your mother,” she said to Dr. Rosenbaum.

Dr. Rosenbaum’s unique and multi-generational perspective on the evolving role of women in Jewish life generated a lot of animated discussions at HUC. We talked about power dynamics in and out of the sanctuary, changing perceptions of gender roles, and the impact of current events on women in Judaism. The #MeToo movement and the election of an admitted sexual predator to the American presidency have highlighted some of the major challenges that women faced then and now.

“Rabbi Sally Priesand did not get where she did easily,” Rabbi Kelman said. “She faced a lot of obstacles. Many synagogues refused to hire a woman even in a student position. And, significantly, she found it impossible to start a family. She says that she could not both be a pioneer for Jewish women and also become a mother. It was just too hard.”

Hopefully some of that reality has improved.

Meanwhile, among the many exciting projects that JWA has launched to make Jewish women’s history dynamic and accessible, they also have a Women Rabbis project. This project chronicles the history and achievements of women rabbis across ALL the denominations. From Sally Priesand through Sara Hurwitz and so many others. It is a phenomenal cohort of women. The students at HUC have one more thing to look forward to after graduating: joining that group of Women rabbis. I’m excited.

Tags:
Sally Priesand Naamah Kelman JWA Judith Rosenbaum HUC
When the abuser is a woman
How do you sing about rape? Chanting the rape of D...

What does it mean to really listen in prayer?

So a funny thing happened to me when I posted about the editor of the Talmud; or, what to do when people think you’re crazy