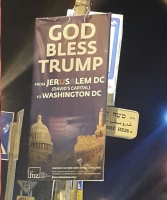 A year in to this reality, I still cannot believe that this man is the president. He is not only a compulsive liar, narcissist, and bully, he is also an admitted sexual assailant. Knowing that sixty million Americans so easily dismissed his behavior towards women in favor of whatever it is that they saw in him has made me extremely distrustful of my compatriots. When I meet people that voted for him or support him – and that incredibly includes people whom I consider friends – I am always uneasy and actually hurt that the sexual assault of women means so little to them, that so many other things were more important than women’s trauma. This remains very hard.

This new development, however, in which many coreligionists think he is the Messiah because he declared Jerusalem the capital, has added a new layer to my psychic angst. They actually think he is a gift from God. The pussy-grabber-in-chief has now been elevated in status among certain Jews because he has taken a unilateral decision about Jerusalem that sets him squarely on the side of the most right-wing members of the tribe, no matter what the implications of this decision may be.

We know that for many Jews, a politician’s worth is based entirely on his or her allegiance to right-wing ideas about Israel, which is why Trump received such a strong vote among Orthodox Jewish Americans. Only Israel matters. Still, when I witness the “Only Israel matters” approach to politics in the Trump context, I am reminded once again of how little women are valued in the Jewish community. So many of my coreligionists continue to throw women under the bus. Our needs as a woman are unimportant compared to the perceived needs of Israel.