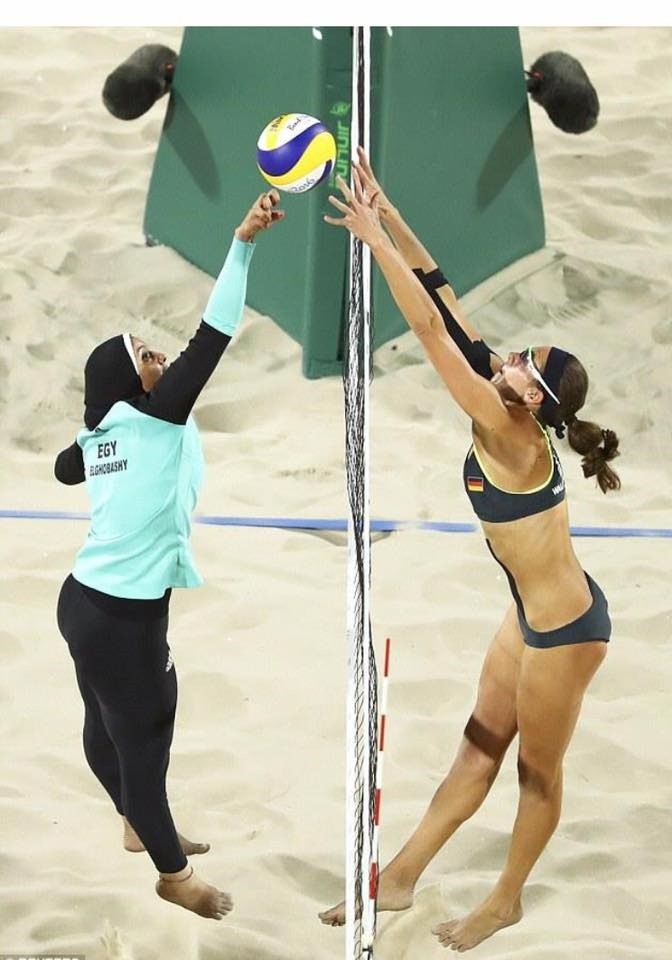 Some people look at this photo and see the beauty of diversity at the Olympics. Maybe. But I also see something else. I see women in two different cultures trapped in their cultures' demands about women's bodies and appearance. Opposite cultures, same problem of sexual objectification. On the right we have women athletes who, no matter what their physical and mental accomplishments, are forced to abide by rules intended to maximize their sexual appeal to gazing heterosexual males. The beach volleyball athletes have been among the most objectified, photographed from behind, valued for their cleavage and skin, commented on for sexual appeal of their skin rather than for their athletic prowess. You are more likely to come across a photo of a volleyball player's behind than one of her slamming the ball. On the left we have a different form of sexual objectification from a radically different culture, one similarly controlled and dominated by men who view women primarily as sex objects. In the culture on the left, the response to this outlook is to maintain extreme, maximum coverage for women. It is the opposite response to the same position of men believing women are primarily objects to look at, the same men controlling their culture by maintaining norms of women's body cover/uncover. Both of these women have overcome their positions as sexual artifacts to achieve a place in the Olympics. That is incredible. Doubly incredible -- like Ginger Rogers doing everything Fred Astaire did but backwards and in high heels. Women often have to work within the rules of their cultures in order to achieve their dreams for this life. Sometimes that is doable and sometimes it just isn't. So this is a picture of women choosing to abide by the rules of their cultures, no matter how sexist and misogynistic, and succeeding in overcoming these excessive obstacles in order to great things and to be great. But it doesn't address the deeper problem. In neither of these cultures are women allowed to prioritize their own comfort or desire. Women in both cultures -- secular and religious cultures -- are molded from the age of zero to be conscious of being watched and gazed upon. In neither secular or religious culture are women and girls allowed to just *be* with their bodies, to dress for *comfort*, to choose based on their own inner feelings and a sense of their own contours rather that on proscriptions of the men dominating their cultures. This is a problem worldwide, the absence of legitimacy for women's comfort and women's desires and women's body autonomy. And so with all the different types of inspiration that this picture generates, it also generates a very strong outrage that women still have to put up with this. Portrait of women in the world, 2016.
Tags:
olympics religious women sexual gaze beach volleyball hijab
Tweet
2904 Hits
0 Comments

Elana Sztokman
JewFem Blog: Gender in Judaism and Orthodoxy
"Help! Our 'Half-Jewish' Daughter is Becoming Frum "Both my wife and I are half-Jewish, and raised our kids as mostly cultural Jews. For the record, our kids are technically Jewish because my wife’s mother was Jewish. This past year while away at college, one of our daughters became increasingly drawn into the Chabad and has told us that she wants to both keep kosher and observe Shabbat this summer and plans on studying in Israel next spring. "We want to support her in wherever her heart and mind goes and are excited to learn from her. But we are also aware of the second-tier status of women in certain Orthodox sects, including the Chabad, and are worried this particular path into Judaism might get in the way of her ambitions. Seesaw, how do you suggest approaching her about this? We suspect this might be a crucial moment and want to get it right. Elana Maryles Sztokman writes:  "Help Her Rememeber Her Old Self Too "There are many beautiful aspects of Orthodoxy, and of Chabad, that can be very attractive to young people coming from non-Orthodox backgrounds. The richness of traditional practices, the seeming tranquility of Shabbat meals, the communal singing, and the escape from secular pressures around material culture and body. All of these can be very alluring, especially to a 20-year-old forging a vision of her own life. The problem is that the allure itself can be entrapping. Orthodox language, especially language aimed at convincing non-practicing Jews to embrace Orthodoxy, is often absolute and black and white. The lifestyle is often presented (especially in places like Chabad) as an all-or-nothing endeavor. And the demands to keep the most extreme formulations of religion are often engulfed in a combination of super-suave marketing and God-pressure. As in, “God has asked this of you, and even though it looks strange it will give you the greatest high.” So to speak.This pressure is especially felt with women, who often go from surfing on the beach or having creative career ambitions to putting on long skirts and scarves and giving up all former iterations of the self in favor of frenetic motherhood. Read more: http://forward.com/opinion/spirituality/310436/help-her-rememeber-her-old-self-too/#ixzz3gK8azoNr
Tags:
chabad religious women seesaw
Tweet
2652 Hits
0 Comments

Hudda Naccache and Lilac: When the bikini is a sign of women's lilberation

For Huda Naccache, Israel’s 2011 representative in the Miss Earth beauty pageant, wearing a bikini is important for career advancement.

The 21-year old Christian Arab from Haifa has modeling ambitions, and in order to get noticed, she posed in a bikini for the cover of the Arab Israeli women’s magazine Lilac.

This may not sound like a big deal in a world where everyone from rock stars to child television icons seems to be willing to pose nearly nude for some photo or another. But in Huda’s community, such exposure for women is still taboo.