A story about a woman finding her voice 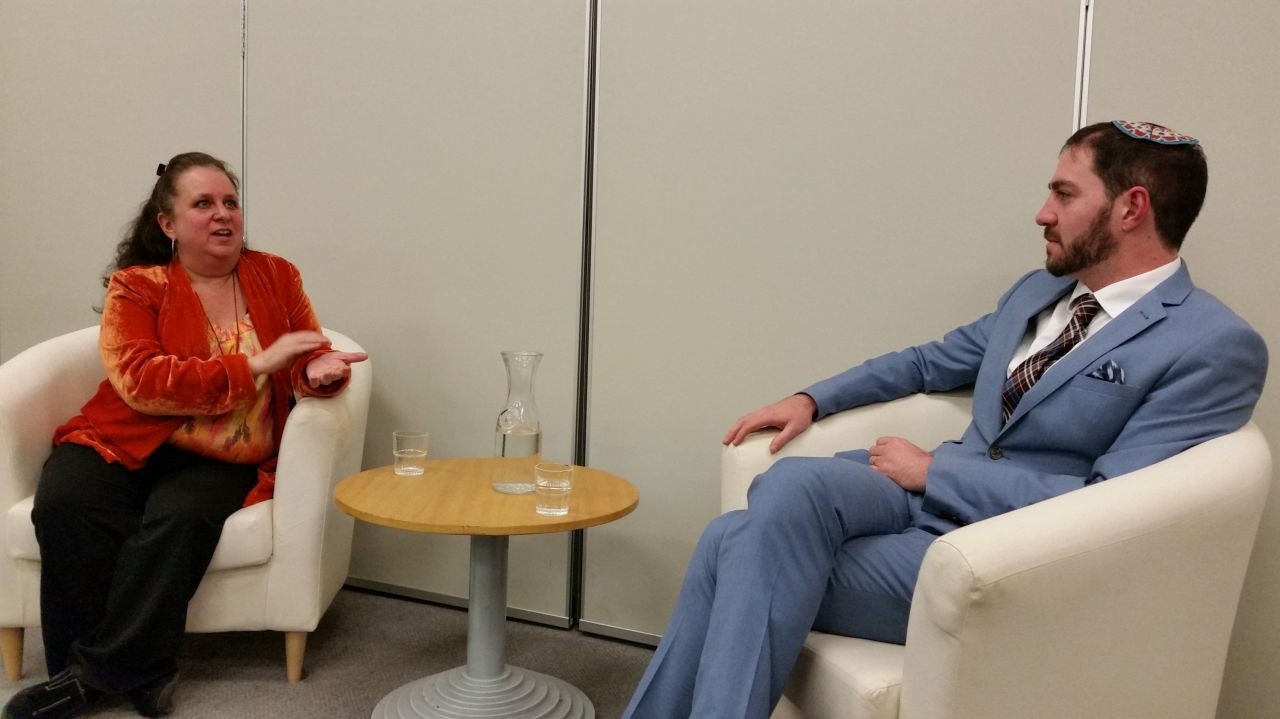 In Canberra, Australia, after I gave a talk at the Jewish community about gender and religion in Israel, I dialogued with the community Rabbi Aron Meltzer (pictured here) about the women in the Jewish community generally. A man in the audience then got up and said, “There is no such thing as Orthodox feminism.” He argued that Orthodoxy and feminism cannot coexist, that any woman who is still Orthodox cannot possibly be feminist, and that only by joining the Reform or Progressive movement will women ever find equality. Community president Yael Cass reminded the guy that even the progressive movement still suffers from sexism and gender inequality. And I pointed out that leaving Orthodoxy is a very painful choice for many women for whom orthodoxy is their whole lives. I also told him that he needed to be nicer to Orthodox women (and possibly women generally – after all, a man telling a woman that he is more feminist than she is, well, that’s already suspect.) I also quoted my friend Dr Susan Weiss who likes to say that we are all compromising with the patriarchy – Orthodox women, Jewish women, women running for president – we are all compromising.

Then a woman named Sarit raised her hand and said that actually she would like to see the Orthodox minyan become more accommodating to women. (The small community holds two services, one Orthodox and one Progressive.) The rabbi said he fully concurred, as others in the audience nodded in agreement. The rabbi talked about having two young daughters and about his concern about their engagement with the services. Another woman disagreed, saying she is very happy to stand in the back and cut the cake for the Kiddush while the men do all the ritual work. But Sarit responded that this kind of disengagement feels wrong for her. The rabbi encouraged the discussion and said that the new structure in planning will have a partition down the middle and will explore other ways to encourage women’s involvement.

I went over to Sarit after the event to congratulate her on speaking out and leading the change. She said, “Oh, I’m not a leader. I’m not going to do that.” I found that surprising and perhaps not surprising, given the kind of Sheryl Sandberg-esque descriptions of women’s lives, especially those who hesitate to ‘lean in’. I told Sarit that she doesn’t have to call herself a leader or any other label, but that she should just keep speaking out about what she wants. She was hesitant.

The next night, my last night in Canberra, I went out to dinner with some of the amazing women of the community, including Yael, Sarit, and others (Anita Shroot, Barbara, Judith Eisner, and Di Hirsch). As this is the country’s capital, the community is composed of extremely intelligent, professional, serious and smart women. Over vegan Vietnamese food, we talked about challenges of dealing with naysayers and haters. I shared some of my experiences with anti-feminist men and boys, those who put down women and girls with statements like, “Women just can’t do what men do,” or “Women are different”, or “Women should accept their nature to rear children,” or, “Why is career so important for women?” – all of which I heard now, during this NCJWA scholar-in-residence tour in Australia. We also talked about Trump and Clinton and the scary, legitimized, new face of misogyny. It was great for us to air these experiences and to share ideals and visions for building a better world for women.

As we were saying goodbye, Sarit came to me and said, “Elana, you make me want to speak!”

I was so happy. That is all I want. This is the reason I go around the world talking and writing and meeting with women. It is to help women find their power and their voice. At least here, among this phenomenal group of strong women in Canberra, I can that it is already happening. That is so gratifying.

Tweet
Tags:
canberra NCJWA yael cass aron meltzer di hirsch
Hillary Clinton is forcing some of us to face our ...
ABC Australia: Why misogyny and feminism are on th...